Only 1 left in stock

The definitive collection of every Buffy the Vampire Slayer comic, for the first time presented in publication order, continues in this all-new volume. THE OFFICIAL TIE-IN TO JOSS WHEDON’S AWARD-WINNING BUFFY THE VAMPIRE SLAYER TELEVISION SERIES! Set during the fifth and sixth seasons of Buffy the Vampire Slayer television series, the Scooby Gang deals with two of their greatest tragedies. Joyce Summers is dead – but while Buffy and her friends must all cope with their pain, one of them holds a secret that might be the only way to stop a demon invasion.

Then, Buffy herself dies and without the Slayer, it seems like Sunnydale has been left defenseless. Now the Scooby Gang must discover if they have what it takes to protect their home – and bring their friend back to life! Collects Buffy the Vampire Slayer #39-50, previously published by Dark Horse Comics. This volume also collects rare short stories including “Willow & Tara: Demonology Menagerie”, “Rock ‘N Roll All Night”, “Mall Rats” and “Angels We Have Seen on High.” 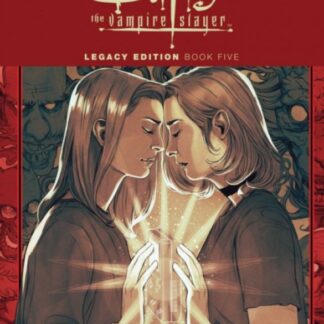