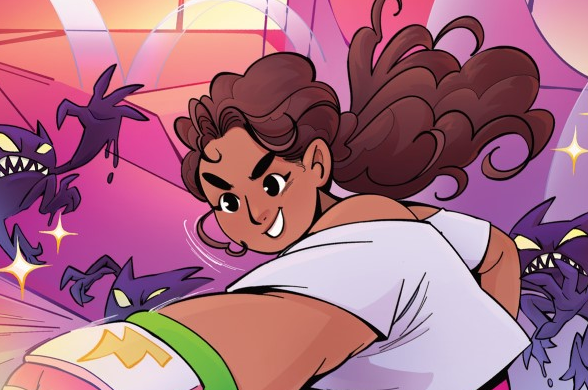 We give a lot of thought on what we want to be when we’re young, and in Desideria ‘Dizzy’s’ case, she’s tried many things! From being a great ballet dancer, a street artist, a football player… Dizzy just can’t seem to get it right! While trying to navigate the troubles of being a teenager, and trying to find her path to greatness, she finally becomes… the Burb Defender?

From the writer of ‘DC Super Hero Girls’, Shea Fontana teams up with Celia Moscote (Illustrator) and Natalia Nesterenko (Colourist) in this new comic run – Getting Dizzy! This story follows the life of teenager Dizzy, as she tries to figure out where her path to greatness is! She’s tried many, many, things, but she just can’t seem to find something meant for her. But, everything changes when the Negatrixes appear!

So… what is a Negatrix? A Negatrix is a “freaky mean alien monster thing” (From the words Fontana herself!) that feeds off negative vibes. Therefore, the Burb Defender is tasked with defeating these aliens before something bad happens! To make matters even more complicated, the Negatrix’s are invisible when performing their mean acts, and only Dizzy has the power to stop them!

Without spoiling the mysterious happenings in the issue, Dizzy also has the responsibility to figure out what happened to the last Burb Defender, and the end of the issue keeps you wanting more!

Throughout the issue, the colours remain as vibrant as you see them on the cover, with an art style that keeps a cartoonish atmosphere (similar to Stephen Universe) and is an excellent pick for anyone looking for a wholesome story, but specifically targeted towards younger readers.

Personally, the issue also acts as a great opportunity for learning. With the Negatrixes purposely being on their best bad behaviour, it’s an excellent outlet to teach younger readers the importance of being kind and how much of a super power that can be alone! It also teaches the importance of independence, and that sometimes we aren’t in control of our mean actions when hit with emotion, apologies can go a long way! This comic book run could be an excellent disguise for important lessons.

Of course, would it be worth it if there wasn’t a cool wide panel hero shot? Of course not! The excellent team up between Moscote and Nesterenko helps the message reach the audience as well as the dialogue from Fontana. You still have your classic element of special equipment that Dizzy uses to defeat these nasty creatures, and the plot line produced still keeps you engaged no matter your age group. The inner dialogue that Fontana produces reminds you of being a teenager, and makes you think of choices that are big decisions in our lives even if we didn’t know it!

Overall, this comic brings to life not only through dialogue, but colours and illustrations as well, the journey of a teenage girl and the battle between not only the Negatrixes, but the battle of being a teenage girl trying to find her way in life; most importantly how to be great!

Getting Dizzy is a 4 part run produced by Boom! Studios with Issue #1 on sale at sccg.co.uk or in-store now!