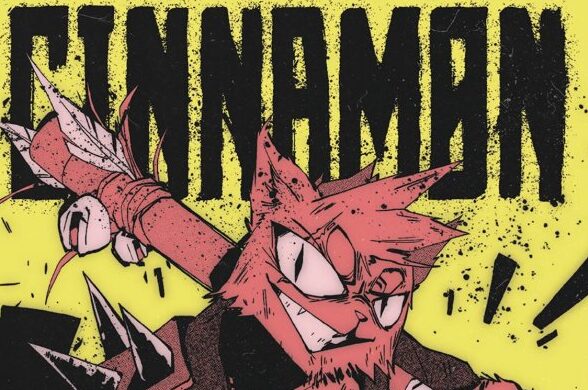 Skyscrapers! Biker gangs! Bombs! …Catnip? Welcome to the world of the dangerous ‘CINNAMON’, and they are definitely no ordinary cat here in ‘Big Kitchen City’. If you’ve ever wondered what goes on inside your little companion’s head, Cinnamon may be the comic series for you. After all, who hasn’t thought about what action-packed, evil robot fighting life their cat is up to! Is it just us?

I’m sure we’ve all wished at some point or another to figure out exactly what our furry friends are thinking about — after all, we look after them! Well, even if we could wrap our heads around it, maybe your first guess wouldn’t be a gang fighting, city lifestyle, but it is from Victoria Douglas! ‘Written, drawn, and otherwise created by’, Douglas takes us into the mind of Cinnamon (based on her first cat, Ripley) as we watch tables and counters turn into skyscrapers, cat toys turn into gang members, and cups turn into bombs!

Owned by ‘Lady’, Cinnamon gets themselves into mischief on their big (or small, depending on if you’re a cat) adventures over three issues.

With catnip being the main escapade of issue one, it’s followed by a sentient laser pointer in issues two and three as Cinnamon fights the threat for peace in Big Kitchen City! Wondering if this hyperactive kitty is the story for you? Here’s a review of the first two issues, so you can decide to join Cinnamon in the finale.

Issue three (FINAL issue) on sale 29/09/21, and also available for pre-order at sincitycomicsgaming.com

Kickstarting the review, admittedly the art style may not be for everyone. However, I personally believe that the simplistic style with the soft focus and pink palette helps contribute towards the atmosphere of the series. As this is through the eyes of Cinnamon, the art changes when we enter Cinnamon’s world of Big Kitchen City, and the comparison between the average world that we know and Cinnamon’s is a genius idea!

Additionally, the lettering also changes between the two worlds to create a clear division, and the sharp text bubbles add to Cinnamon’s character. I love the gritty and heroic dialogue (“The people of Big Kitchen City need me.”) which easily shows us how Douglas wants the character to be portrayed.

Also, the use of Guppy (Lady’s fish!) being almost the “Man in the chair” keeps the humour throughout the issue. The way the art style switches between the regular world and Cinnamon’s world in an action-packed motorbike chase helps show what happens in Lady’s eyes when we’re in Cinnamon’s world, which means Douglas easily develops familiarity with the common troublesome behaviour of a cat!

The text becomes so relatable (A personal favourite line: “Momma’s gonna watch some NETFLIX!”) and really shows how much effort a cat is willing to go through for catnip. As we come towards the end of the first issue, it also emotionally portrayed the relationship between a pet and their owner, and I’m sure we can all agree we can’t stay mad at them for too long!

The second issue starts with Cinnamon being suspicious of Lady, and when combined with the lettering and art style, it leaves a hilarious impression on the reader as the humour shines through the page! Although the issue simultaneously balances an impressive relationship between humour and action/adventure, it still manages to keep the main focus of the issue; The Cinnamon Lazer Defense Force.

The further into the issue, the more we get to see of Douglas’ amazing talent through her creativity, especially in regards to the laser pointer. I heavily encourage you to pick this up and experience it yourself! We get to see an aggressive side of Cinnamon (“…once I’ve torn you…limb from limb!”) when it comes to the newly introduced antagonist, and it’s great to see the different personalities between the two (and to specifically highlight, the attitude from the laser pointer is highly enjoyable).

It’s also impressive to see how Douglas created such complex emotions for Cinnamon, and it really helps the reader stay engaged when Cinnamon is met with guilt. We’re then taken back to our ‘Man in the Chair’, Guppy, who uses his tech to translate (into the language, guppy, of course) and to figure out who exactly this new villain of Big Kitchen City is. This then leads us into the finale issue!

Will they successfully manage to uncover the laser pointer’s weak spot, or will chaos reign over Big Kitchen City once more? This issue leaves us with many questions, and it only builds onto the excitement for the final issue!

Cinnamon is everything you would want out of a comic book; the adrenaline from a big adventure, meaningful art style, humorous writing, and a new fan-favourite essential of ours… cats!

We implore you to pick up the two issues available, so you can join us all in reading the third and final issue, available in-store on the 29th of September, OR available for pre-order.

Trust us, we hope we’re not the only ones now thinking about the evil robot fighting lives of cats now, so you definitely don’t want to miss out!